After months of preseason testing and several monthly updates, the first season of Anvil: Vault Breakers is finally here. This is the update you’ve all been waiting for! We worked day and night to bring you the most exciting season and are thrilled to present our accomplishments. With new game mode, Breaker, relics, bosses, among others, this is an update you don’t want to miss! The update is free to all players who bought the game as Game Preview on Xbox Series X|S and Xbox One, or players who have access to it with Xbox Game Pass.

The Season Challenge mode is the highlight of this update. This will be our core roguelike game mode that creates different challenges every season. Unlike previous game modes where each stage was determined randomly and the number of stages and difficulty was capped, you, the player, can now push your limits in the infinite difficulty available and create your own paths. The higher difficulty you choose to venture to, the greater the end reward will be. Rewards will include new weapons to unlock as well as a chance to obtain rare relics and Crons.

You will also be able to take control of your build with the Season Challenge mode. With medals obtained in the game, you can now change weapon effects and upgrade or sell relics. 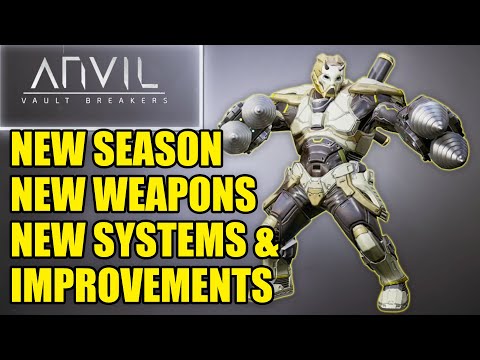 In addition, instead of starting with a fixed weapon for a Breaker, you can now choose your starting weapon. A new system is in place where players can upgrade their starting weapons and change them so that you are strong from the get-go when you enter a galaxy!

After playtesting him with the community, Quake will officially join the game as a Breaker with this update. That is, you will be able to unlock new achievements, new skins, and weapons for Quake. We also incorporated feedback from the community such as balance, scaling, skill change, and bug fixes, so we hope you guys continue to improve the Breaker with us.

Four new bosses are here to challenge players. Also, there are new monster types that appear with the alert level to add extra challenge to the game. Not only bosses, but also new relics, toy workers and skins are here for the new season, so dive deep into the galaxies with your friends now!

This game is a work in progress. It may or may not change over time or release as a final product. Purchase only if you are comfortable with the current state of the unfinished game. ANVIL is a multiplayer co-op top-down sci-fi roguelike action shooter where you control characters called Vault Breakers to explore various galaxies that are crawling with monsters. Find relics inside Vaults to increase Breaker’s ability to survive and fight on this godforsaken galaxy. # ANVIL Ancient Vault Investigation Lab ANVIL is an agency that searches for «Vaults”, the remnants of alien civilizations scattered throughout the universe. Become a «Breaker» searching for “Vaults” and explore the unknown galaxy. Each galaxy consists of random planets and unique boss monsters. By defeating monsters and opening the Vaults, you will be able to utilize the stunning powers within. # Breakers The Breakers are the seekers of Vaults. They have maximized their combat capabilities to survive various threats that they may encounter on different planets. Breakers with unique abilities and skills are waiting to be selected. # Artifacts and Vault Weapons Over 100 randomly generated artifacts and dozens of weapons will make every session unique and different from previous sessions. You will be able to explore a combination of different playstyles by testing synergy between various artifacts and obtain powerful weapons to get the “ultimate” Breaker! # Death and Rebirth The Breakers enter combat with their mechanical body. They are rebuilt in ANVIL if they are destroyed during an exploration. Your Breakers will gain EXP during battle that will enhance their strength and give them new powers. The Breakers are not afraid of death because death only makes them stronger when they are rebuilt. Full details on the latest status of the game, how you can give feedback and report issues can be found at www.anvil.world.